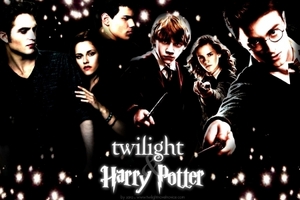 Both twilight and harry potter are very successful, especially among teenagers. Some people keep arguing about which is better, though in my opinion, THEY SHOULDN'T BE COMPARED!

Now, i have to admit i love both series! I'd say harry potter is unisex and appropriate for all ages, whilst twilight adresses mainly to teenage girls. HP talks about friendship and love, while twilight is more romantic! Also, hp gives lessons of life, although maybe in some cases, i would prefer reading twilight.

Finally, They are both written by two very talented and imaginative writers, j.k rowling and stephenie meyer. They wrote these books to give teens (and not only) inspiration and time of happiness. So, if you don't like one of these two series, don't blame them! We can't all have the same tastes!
LadyEmzy16 You know I never really liked twilight...and I personally think that HP is a whole lot better, I'm not saying I hate twilight no no no...I'm saying Twilight is great to some ppl, but it's just average to me..so thats why I never read or watched twilight, cause I think that it's like any love story only with vamps and werewolves.
1
Team Harry
posted by one_a_kind4ever 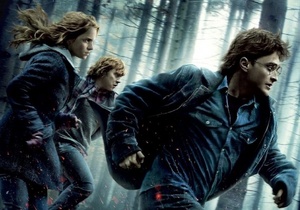 In my last article I got some comments that stated that I didn't support my opinion so I will try again.

Harry Potter is definitely going to be a story that people are going to be telling 50 years from now. Harry Potter is a fun filled story taking place in a wizarding world as many of you know. Over the past couple of years it has been argued that Twilight is better. Us Harry Potter fans disagree because a 17 year old wizard who defeats a dark lord is WAY better than a sparkling 107 year old vampire virgin. I respect the fact that Twilight has fans as well that like Twilight for reasons we...
continue reading...
Great and not-great things about harry potter
posted by mr-cullen
well,
copied from a web-site:


Great:
Wizard-on-wizard combat in the films
Writing battle scenes was never Rowling’s strongest suit, but her fight scenes became electric on the screen, more or less literally: The effect when two thrown spells locked in mid-air is particularly splashy and creative, with the clash of energy throwing off heavy, wet detritus that looks like paint. Scenes like the Battle For Hogwarts at the end of the series, the Ministry Of Magic showdown in Order Of The Phoenix (with good and evil wizards zipping around as light and dark clouds, and the sense that more action was...
continue reading...
2
Examples of how to properly defend a Twilight or Harry Potter troll.
posted by omg_stop
Lesson 1: PROPS!!! Lots and lots of props!


Harrypotterlurvfeverweasley_ravenclar-granger gave me props for my comments:
“Hi I really like the way you verbally attack Twilight fans. The way you threatened their lives by tracking down their IP address and sending them cryptic letter describing how you’re going to kidnap them in their sleep and dismember them limb by limb was so cool. Don’t worry; I’ll have your back if they call the police. I know you’re totally justified because I hate that book too.”


Cullenlife_number1fan_forks gave me props for my articles:
“Hey, that wasn’t fair,...
continue reading...
4
Things Twilight and HP both have...
posted by ariba_c
Not sure what to title this exactly:P

Anyways this was a comment on some forum here I cant remember and I liked it so decided to post it as an article. It was by Lumos_Maxima I believe.


You have Robert Pattison play Edward - we had him play Cedric. He even admitted to enjoying play Cedric more than Edward ;)

You have Jacob and Edward - we have Draco Malfoy and Blaise Zabini.

You have Bella Swan - we have Bellatrix Lestrange who could Avada Kedavra your Bella any day.

You have Jacob Black - we have Remus Lupin who is the real werewolf here. Jacob isn't even a werewolf, he's a shape shifter.

You have...
continue reading...
3
flaws in twilight
posted by mr-cullen
NOTE:copied from web site.
if same article is there tell me i will remove this

1) Sperm are living cells that need to be reproduced. If you have been dead for a hundred years such as Edward Cullen your sperm would be LONG dead. Also sperm needs protein, something Edwards body has no need for. If Edward has no sperm, how did he conceive Renessme?

2) 23 and 24 chromosomes does not produce a healthy off spring. Nessie either had a genetic disorder would of died.

3) If Jasper shouldn't of been around people why did he go to school. The Cullen family lived in the middle of no where. I'm sure they could...
continue reading...
Dumbledore???
posted by spongebob105
Did you ever think that dumbledore was useing harry potter? Well he did! As you can see in snape's thoughts that he did. Dumbledore said that he was like a pig up for slauter! I mean who is mean to say that or act twards that person. WELL HE DID!

He doesn't realy think about what would he feel if he was steping into his shoes. I mean come on. He thinks he so COOL that he has the elder wand. HE'S A NORMAL PERSON FOR CRYING OUT LOUD!


Well now getting back to the subject. Dumbledore is a MEAN person so if you want to find out your self then go to chapter that says "Snape's Memories"
-Spongebob105
Points to Address - Letter to Smeyer
posted by DracoLuver
Hello everyone!

I'm planning on writing a letter to Stephenie Meyer regarding the Twilight series. I wanted to address all the points many people do not like in the series. The letter is going to be friendly and straight-forward. I wanted to hear what everyone would want me to include. These are a few of the topics I am going to be including:

These are just a few. Please add anything and if there is something specific you'd like me to add.

I'll be working on this letter and posting on Sunday on Fanpop, so I can add anything else and have your approval and then I will send it to her.
I understand that Seth probably won't let it get to her, but it's worth a shot and I will post his reply (assuming he does reply.)

Thank you! :)
hermiones
posted by june13
we all knowed hermiones was one of harrys friends anyone who did not know her know her for a know it all over the years at hogwards she larned not to worry want everyone says about you and want you are in book five six and 7 we was showed want she could do that was not spells and every thing esl love she fell hard for one boy that was her freind ron and some us thougth that i =t was going to be harry or nelive over the ages she had kids and they turn out to be smart and good at hogwards to and we all thought that she would end up somewhere esl on the road
3
FAKE interview with J.k. Rowling and Stephanie Meyer(what would happen?part one)
posted by moolah
I thought this would be fun!Guess what!?What if I had an interview with J.K. Rowling and Stephanie Meyer together!This is the fake interview with me,J.K. Rowling,and Stephanie Meyer:
----------------------
Me:Welcome,Stephanie.Welcome,J.K.
Rowling:Hello.
Meyer:Hi.
M:Are you ready for the interview?
R:Yeah,Stephanie.
Stephanie:Yes.
M:Ok,since you both write fiction-how did you come up with the books?
S.M.:It was a dream,the meadow scene and I woke up and I'm like,"How did they get their?How did they fall in love?WHat would happen,next?"I jumped out of bed and sat down and started writing.Going,"I can't...
continue reading... 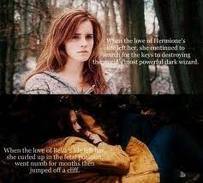 4
Bella vs Hermione
added by MissKnowItAll
Source: huhyadit on wordpress.com 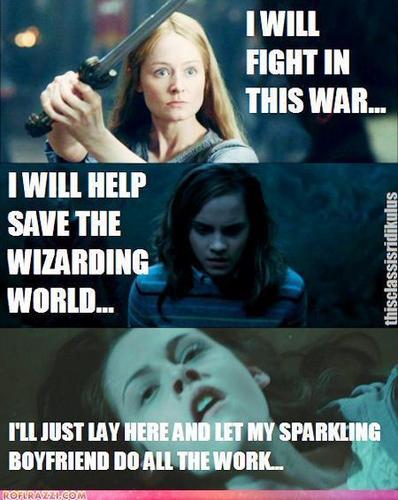 29
Fred Is Not Dead!
added by TeamSiriusBlack 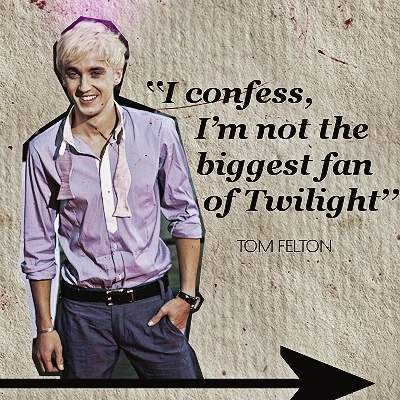 35
Tom, You're just so TOTALLY AWESOME!!
added by NymphadoraXD 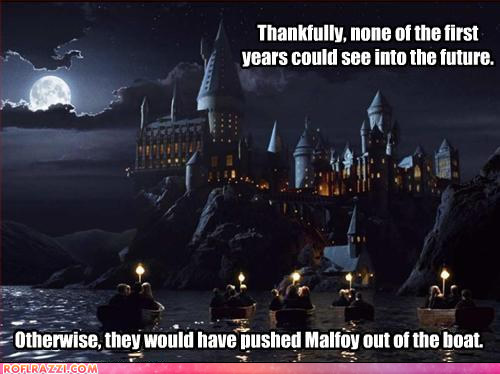 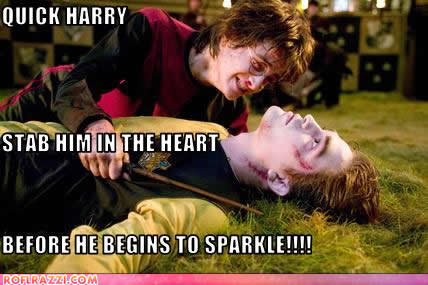 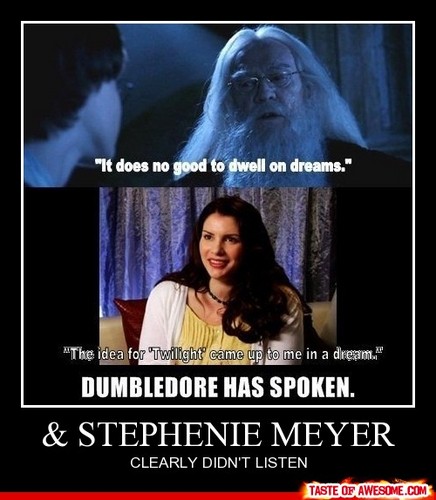 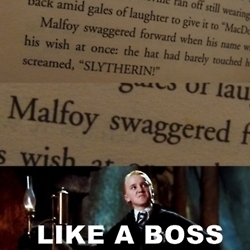 4
Draco- Like a Boss
added by frankthe2nd
Source: tumblr 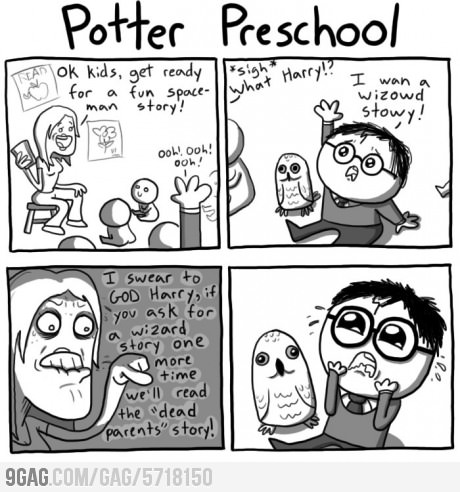 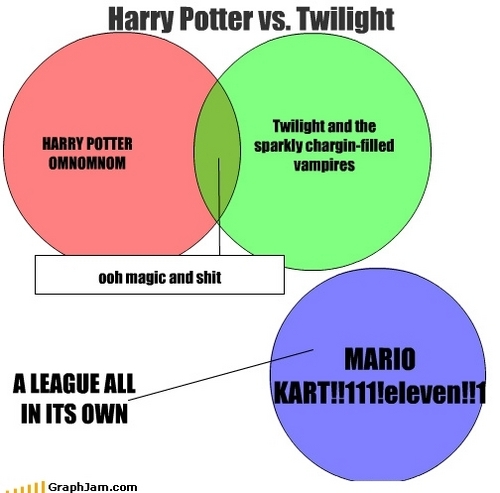