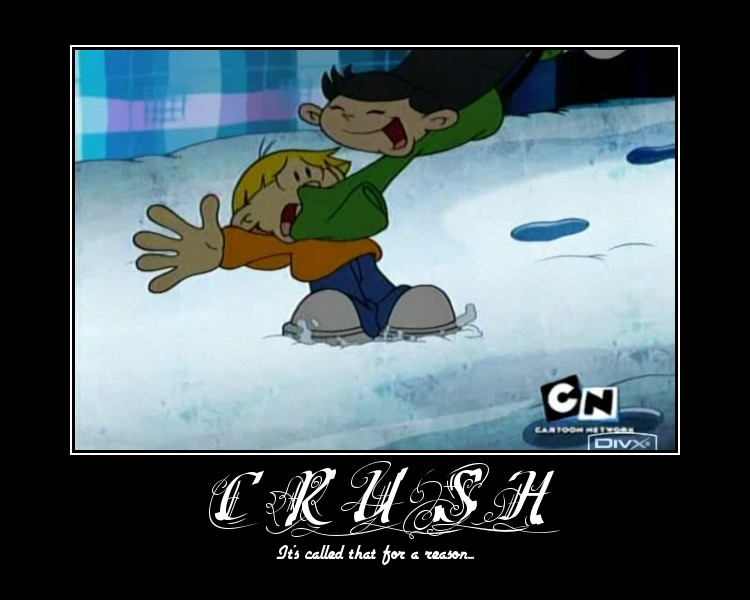 duncylovescourt, kmfdm543 and 1 other like this
1
Op. B.A.S.E.B.A.L.L. (Bad Accident Surprisingly Enterupts Boy’s Advanced Little League) Chp. 1
posted by taismo723
Numbuh 4 was practicing for the game on Saturday. It was a Kacey's house, cuz if it weren't for Kacey, none of these people would know each other. He had his whole team. He began pitching balls to Kacey.
Three out of four home-runs.
“Wow, even I can’t do that well.” Wally would always tell her.
Wally threw one to David. Ouch.
It hid Wally in the head.
“Are you OK?” David went up to Wally.
“I’m fine, except for this BIG BRUISE ON MY HEAD!” Wally yelled.
Then, he threw one to Christian. It went far.
Same thing for Megan, Hoagie, Raleigh, Kiki, and Abby.
Then, it was Wally’s...
continue reading...
Op. H.A.U.N.T. Chapter 8
posted by taismo723
When Christian dropped the three in the room, David cussed under his breath.
“Welcome to the club.” Kacey said, tied up to Raleigh.
Mitchell tied David to Kiki and Emma.
“Great!” David said. “How jittery! What a jittery day!”
“SHUT UP!” Emma said.
“Ya, we’re all trapped here by those little people who we met at that carnival last summer.” Kiki said. “So, if we stay calm, we can get outta here.”
“Wally told me how he got out from these goons.” Kacey said. He hopped down stairs and the chair he was tied to broke.”
“Ya, perfect! Except we’re not tied to chairs,...
continue reading...
1
Op. H.A.U.N.T. Chp. 7
posted by taismo723
Wally and Kuki had been walking around the house for a while. Wally was hoping he could kiss Kuki again. He hadn’t worked up enough courage to ask if they could kiss again. Kuki didn’t talk either. She was just looking down, kinda sad. Wally wondered if she was sad about the kiss. He got worried.
“What’s wrong?” Wally asked.
“Nothing.” Kuki said, a tear rolling down her cheek.
Wally took a deep breath. “You’re not upset about our kiss, are you?”
Kuki gently smiled. “No, not at all. In fact, I loved it. It’s just…”
She almost teared up again.
“You don’t wanna...
continue reading...
2
Operation: H.O.S.T.A.G.E.
posted by kndluva
Operation: H.O.S.T.O.G.E.


Megan entered the gymnasiun. It reeked of sweat and Axe Body Spray. Limp red and pink streamers were hung acrost the bleachers. Large wilted paper hearts hung on the walls. Luke warm cherry Kool-Aid in a punch bowl and half baked cookies in the shapes of L, O, V, and E. were on plates atop a lace covered red card table. A Taylor Swift love song driffted from the P.A. system. It was your basic Middle School Valentines Day dance. Girls were clustered in groups on one side of the gym. Boys littered the other side. Megan...
continue reading...
1
Op. H.A.U.N.T. Chapter 6
posted by taismo723
Emma didn’t enjoy having to add David to their group since his partner was possessed. But she sighed.
Then, David’s communicator went off. Emma kind of recognized the ringtone. She had no idea how she knew, but it was the Fable theme. (I’ll explain this game later)
“What?” David answered.
“It’s a text, Smart One.” Kiki pointed out.
“Oh.” David checked his messages.
A text from Wally. It said. I DID IT! David frowned. What the fluff was this?
“What is it?” Kiki asked curiously.
“IDK, but it seems suspicious.”
“Maybe he means he finally completed a serum to make...
continue reading... 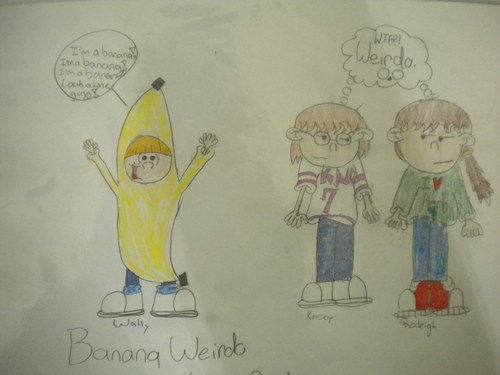 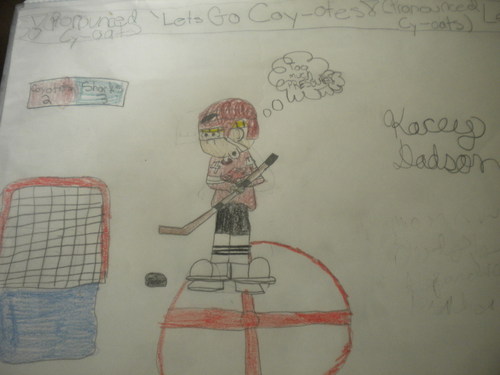 Wally the Hockey Player
added by taismo723
Source: Me.
Op. H.A.U.N.T. Chapter 5
posted by taismo723
Brooke and Abby creeped past the first hallway. They heard spooky laughter. All of a sudden, a little girl appeared in front of them.
Abby got suspicious. "I've seen you before." She said.
"No." The little girl said.
Immediately, Brooke slapped her. Her hand it the girl's face. Then, the little girl moved back so Brooke would think she was a ghost.
"Ghost?" Brooke asked suspiciously.
"No." Abby said.
Then, the little girl started floating in the air. She grabbed Brooke and Abby and carried them off.
"WHOA!" Brooke screamed.
Abby sighed. "She's on strings, Brooke."
The girl took them to a big...
continue reading...
Birthdays
posted by taismo723
Hey everyone I just wanna let you know that 2 days ago Wally turned 11 and yesterday Kuki did (life works out weird that way) so from now on just call everyone 11.

Yeah, I know they've been 10 FOREVER. It just seems that way. Now, if you're working on a story, just leave them aged 10 until finished. Then, everyone is 11 from that point on. (WHOA, didn't I just say that?)

Ya, oh and I thought I'd let you all know about my next story.

Wally is good at baseball. So good, he's the captain of...
continue reading...

ABC of KND
added by kndluva
The basics of KND in ABC form
video
codename
kids next door
cartoon network
wally
knd
numbuh 4
kuki
You Might Also Like...

Numbuh Two of the KND

Codename Kids Next Door Operation REVENGE Movie
2
Op. H.A.U.N.T. Chapter 3
posted by taismo723
"Wow!" Kacey exclaimed as she and Raleigh entered the living room of the spooky house. "This looks just like the room in the Tower of Terror!"
Raleigh looked up above the fireplace. "Uh, Kacey?"
"Well, yeah, I know it's scary but-"
"No, look!" Raleigh pointed above the fireplace and both girls froze.
Above the fireplace hung a skeleton by its neck, it had a knife logged in its back, and one of those very old guns in its head.
Kacey grabbed her KN-Communicator.
"What's that?" Raleigh asked.
"You're in the KND, Smart One." Kacey said turning it on. "You should know."
"Ya but you know I have...
continue reading...
Operation:T.H.E.A.T.E.R.
posted by amy23000
the lights were dark...all is you could see was the light from the stage.. until they went out... then suddenly, a shrill high pitched scream could be heard through out the seats and behind the curtain...its like some one was screaming 'bloody murder' except-they were
------earlier that week-------
"AAAAH" every one in the tree house that belonged to sector v and like a second tree house to sector q went silent then completely ballistic running from the spot-they had heard kuki screaming
"whats wrong?" kacey said with shock every one was thinking it but didnt wanna say it plus some were to busy...
continue reading...

1
KND - Super Trouper
added by dustfinger
Made by Vera274
video 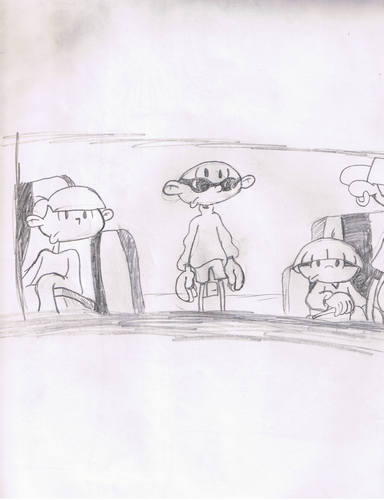 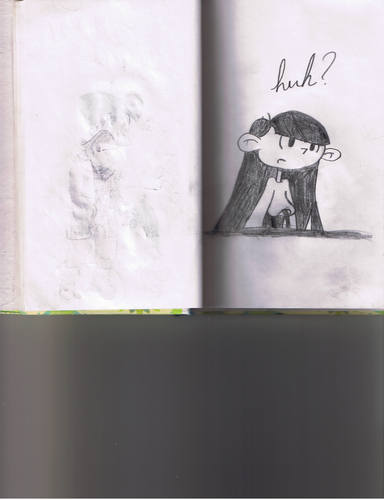 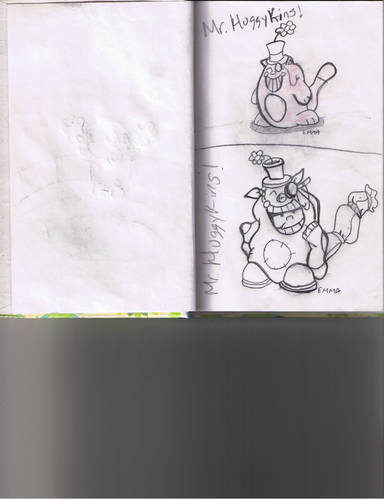 MR.HUGGIKINS!!!
added by amy23000
Source: me charecter to mr. W
2
KND Facebook Chapter 2 Facebook Can Mess With Your Mind
posted by taismo723
The next morning, Kiki got up at the crack of dawn. She got on the computer and opened Fanpop, and Facebook. Or course no one was on. So Kiki decided to mess with her younger brother, Chris.
"Chriiiiiiiiiis," Kiki said into Chris's ear while he was lying in bed. Chris didn't flinch. "Darn." Kiki muttered.
Then, one of the kittens, Pecan, peered from underneath Chris's covers. Kiki jumped back.
"Pecan? Sleeping with Chris is a no-no!" Kiki whispered. She lifted up Pecan and brought him into her room. She chased him around the room for a bit, until he out-ran her.
Then, Kiki got a CRAZY idea....
continue reading...
2
Operation: T.H.A.N.K.S. chapter 2
posted by amy23000
"uhhhh numbuh 2?" "yeah?" "you should start going up to your room and locking all doors" kuki was pretty sure wally was gonna eat him and cough up the goggles "um i agree" megan was now pushing him up the stairs but nobody even looked at wally they just assumed that he was pissed by this time hoagie was up in his room but megan was in the locked in that room with hoagie "soo what'cha wanna do?" hoagie raised one eye brow and did that little purr thing. megan ran to the bathroom, barfed and was holding her stomach running out of the room but... back to the story line wally was listening to his...
continue reading...
1
Operation: T.H.A.N.K.S. (T.hanksgiving Huge A.ward and Never-ending K.ick-butt S.inging )
posted by amy23000
"OH MY GOSH!!!!" kuki was screaming repetitively she ran into the 'GIANT TV ROOM' where she found numbuhs 2,4,5,7 and megan and kiki watching Yipper except for kiki and megan who were fighting over the remote turning the thing on mute, full volume ,they had to have gotten 4 complaint phone calls from kaceys cell phone especially since they unknowingly were fighting over the radio remote rather than the one that mattered "GUYS!!!!" if kuki wants somthing shell get it one way or another mostly by yelling they were all rabbling saying 'sheesh' or 'man that girl has a voice' or something like that...
continue reading...
2
Operation: C.O.S.T.U.M.E. Ch. 6
posted by kndkid96 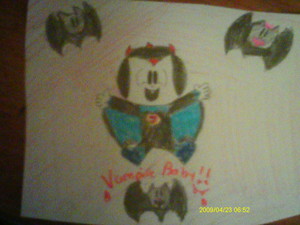 Vampire Baby!
"You picked HIM?" Kacey shouted.
"Vell, vhy shouldn't I? He's a good biter, he's his brother's mortal enemy, and he's freakin' ADORABLE!!!" Kiki responded.
Her sidekick babbled his usual babble in a Transylvanian accent.
"How'd you get into the Beetles House?"
"Very carefully!"
Kacey rolled her eyes.
"Ha ha. But seriously, JOEY?! Why not Tommy, Mushi, or the Count?"
"Cuz I have no idea vhere they are and Fangface still creeps me out!"
Joey nodded. Then, his eyes fixated on something. He wriggled out of Kiki's grip and crawled around the graveyard.
"Should we be concerned with the whole blood thing?"...
continue reading...
More Cards
101112131415161718192021222324252627282930