1
Fionna and Cake: An Episode Review
posted by Skittygirl 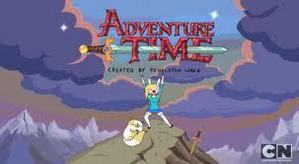 Ever since Adventure Time Season 3, Episode 9 aka “Fionna and Cake” came out, many avid Adventure Time watchers went wild making genderbent versions of characters that weren’t introduced yet, and it even gave hope to Fionna X whoever-they-ship-her-with shippers. But I suppose that can’t be an odd thing for a fan to do—what’s odd is that now some are saying they like Fionna and Cake better than the originals (kinda like me), while some are suggesting they get their own show altogether (okay, now that’s NOT me). But while many are into the gender-bender craze (wow, just one episode and it spawned its own fan club?), do you think Ice King’s fanfiction was really all that?
Let’s start with some criteria:

1.    Plot.
Actually, there wasn’t much of a plot in the story to begin with, if you know what I mean. Pretty much the same with the pilot episode (translation: the episode where Finn was so weirdly-drawn and where Lady Rainicorn spoke gibberish instead of Korean). Fionna and Cake in the Candy Kingdom, Ice Queen gets Prince Gumball, and all the rest. Nothing much to it—oh, yeah, and that part where it was actually Ice King’s fanfic? Big surprise there.

2.    Interaction.
Who would’ve believed that it would seem oddly topsy-turvy? In the original AT, it’s Finn who gets all crazy with Princess Bubblegum, Finn who does everything to impress her, and Finn who tried to win her heart. It makes sense for each time he rescues her from the Ice King. But in the gender-bender world? Prince Gumball is the one who courts Fionna? Sure, sure, usually and traditionally, it’s the GUY who sets his sights to the girl, but it just doesn’t make any sense whenever I see Fionna rescue the Candy Kingdom prince and I have that in mind. It makes me feel like there’s no motive behind Fi’s rescuing PG other than the fact that she wants to be a hero in the Land of Ooo, like Finn. And, like, what was Marshall Lee doing in the ball? While Marcy and PB are…”enemies” in the original universe, shouldn’t it be the same way, too? As in, Marshall Lee should not be there, being “enemies” with PG? That’s just…huh?

3.    Character Portrayal.
Do you really think the gender-swapped versions really represent their original counterparts? Take a look, but I’m warning you: This is going to be a little…long.

a.    Fionna: As much as I appreciate her guts and wits and stuff I like about her better than Finn, is it me or am I the only one who thinks that Fionna seems to be a bit of a dick? (The scene where she shoves PG away and says she’s not interested is solid evidence to my statement.) And her speech where she goes all like, “Maybe I don’t have a boyfriend is ‘cause I don’t need one…I am who I am…) and all that? Those are the kinds of words that I can’t ever imagine come out of Finn’s mouth. Ever.

b.    Cake: She may talk the sass, but Jake is more of a lady’s man, with the fact that he has a way with flirting with the ladies. (Don’t believe me? Well, take a gander at the episode “To Cut a Woman’s Hair.”) Jake is a lot more of a smooth-talker, and I sure as heck do not remember seeing that in Cake (which makes me wonder if everything that happens in Ooo is mirrored in the genderbent universe—because if, like, in the episode “Lady and Peebles” where Lady says she’s pregnant? What about Cake and Lord Monochromicorn? Would that make Cake pregnant? Now that’s, like… “What the cabbage?!”).

c.    Prince Gumball: This was kind of offensive for me, since this character received generally “harsh” opinions about potential homosexuality (translation: many people think he’s gay). He’s also heavily criticized for being a wimp for having a girl save him (and also for “loving” Marshall Lee—you wouldn’t believe that some people actually ship him and Marshall). What do I think? That’s just…ugh! I mean, just ‘cause he wears pink doesn’t mean he’s gay—he’s Princess Bubblegum’s genderbent version! So of course he should wear pink—like her!

d.    Lord Monochromicorn: Now this one was a major disappointment for me—not because of his looks and color, but because of his “language.” Seriously, Morse Code?! I sort of expected him to actually talk, you know, in Spanish or Italian or something. Sure, sure, both he and his female counterpart do communicate in a language some can’t understand, but I wanted him to really speak.

e.    Ice Queen: This was a major “huh?” for me—she’s badass, totally, aggressive, and…am I imagining this? She can put up a good fight! She’s nothing like Ice king’s loser ways. But when I found out it was Ice king’s fanfiction in the end, I guess I shouldn’t be surprised—of course the Ice king would make his gender-swapped version a total badass fighter; after all, that’s what he thinks he is! *eye roll*

f.    Cinnamon Bun (female): When she was there in the minor scene when she was talking to PG in a very mumbled voice, I was shaking my head in disapproval. A barely audible voice? And am I the only one who thinks she looks very…fragile-looking? That’s hardly Cinnamon Bun at all!

g.    Marshall Lee, Tree Trunks (male), Gumdrop Lad, Starchy (female), and the rest of the characters: These characters are free from blame or criticisms…for now. After all, Marshall Lee had only shown up for 7-plus seconds and didn’t say anything (plus, there wasn’t anything he did that was out of the line to Marceline’s personality), and everyone else were only…extras. But until the episode “Bad Little Boy” shows up (*cough, cough* MAJOR SPOILER ALERT! *cough, cough*), we’ll just cross out fingers and hope not everyone is badly portrayed.

4.    Impact.
Insofar, the production of “Fionna and Cake” was such a hit, that, other than being (currently) the second-highest rated episode (“Burning Low” broke its record), it was so popular that many viewers suggested if there could be another episode (which was later confirmed by Pendleton Ward) and that Marshall Lee could get his own lines (also confirmed). Despite having generally not-so-greatly portrayed characters, it still paved the way for certain fans to make their own gender-swapped versions of Adventure Time episodes (like me—plus, I even saw someone make a gender-swapped version of the entire Adventure Time season one in FanFiction.net! I refuse to show you the link and point you to the author—if you’re curious, go and try to find it yourselves). And, as I mentioned in the beginning, some are hoping that Fionna and Cake could get their own series.

5.    Overall.
While I have to admit that I am one of those who enjoyed “Fionna and Cake” and liked the gender-benders better than the original ones, even an Adventure Time fan like me feels like the episode felt a little too…mature. The characters didn’t really portray their original counterparts at all.
If the Ice King had an account in FanFiction.net, I would slap this review at him and say, “BADLY WRITTEN, ICE KING! VERY, VERY BADLY-WRITTEN!”

•    Wow, this review is longer than I thought! ^^ Huh, I bet some (or, hopefully, a few) of you are wondering why I’m criticizing “Fionna and Cake” when I just mentioned in the beginning that I like it. Well, dear, this is a review, and reviews must NOT be biased. When there’s a boo-boo in what you’re reviewing, say it; don’t hide it just because you like the reviewed object in question. 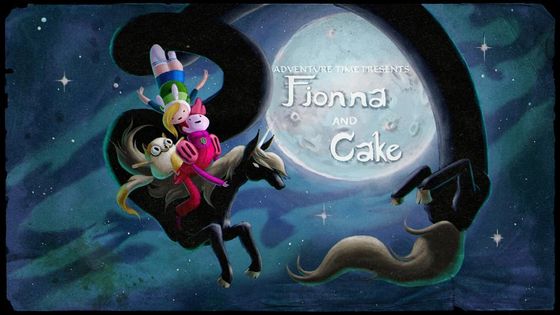 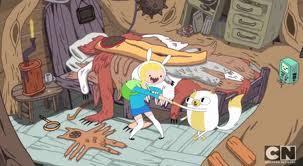 tommytoes likes this
astigpinoy On character portrayal: Fionna and Cake > Finn and Jake. Those words that came out of the girl's mouth... She's a PUSSY, not a dick. (Am I still that wise ol' 13 year old?) Finn and Jake can beat her and Cake out in three aspects. Awesomeness: Finn has a ton of swords. Jake, has his own gang . Pink crystal sword? WEENIE! Morning Star mode? DUNGEONS AND DRAGONS COPYCAT! (used to watch these in the local arcade) Being smart: Finn and Jake can sometimes mutter words of wisdom ("sucking at something" quote by Jake, can't remember what episode it is) and I have never seen her and the cat say something like those. More probable: She's a tomboy (WTF DID I JUST SAY? ERMAHGERD!). Being strong: Finn has been proven to be emotionally and physically strong, especially in "Another Way" and "Burning Low". With Cake, if she learns that she is preggy, how will she react? (Abortion? HELL NO!) If she and Cake gets their own series, Finn and Jake would STILL and WILL stand out. All in all, F n' J < F n' C. But if they team up, things that was labeled "unimaginable" and "horrendous" by some fans may happen. Happen... The impossible is going to happen. Some things may never gonna change, but they are still subject to reform over time. 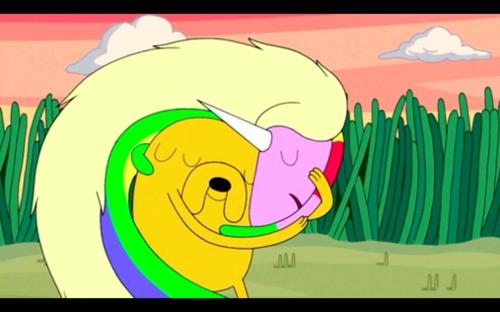 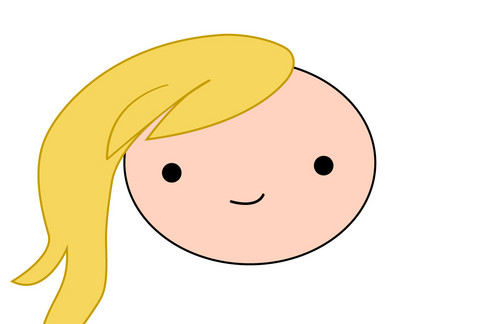 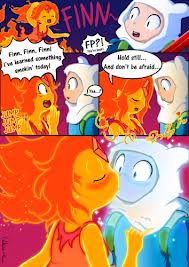 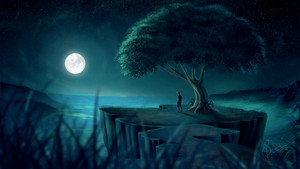 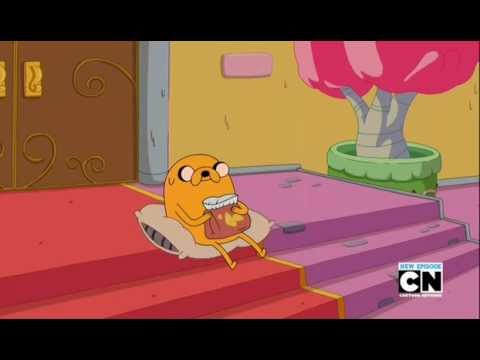 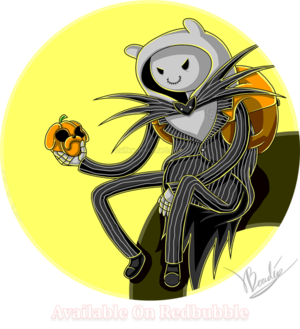 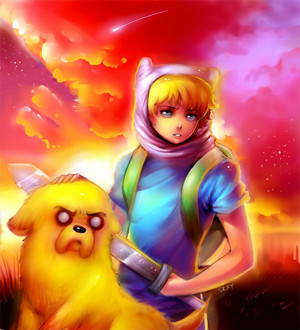 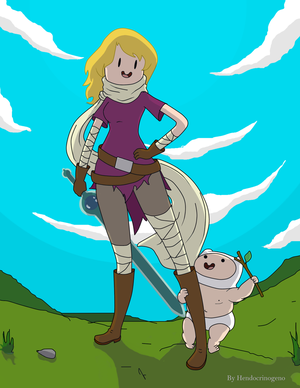 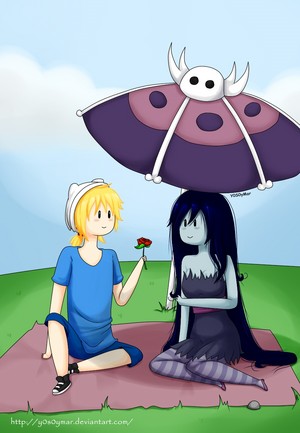 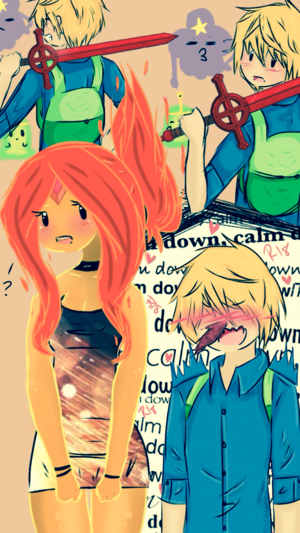 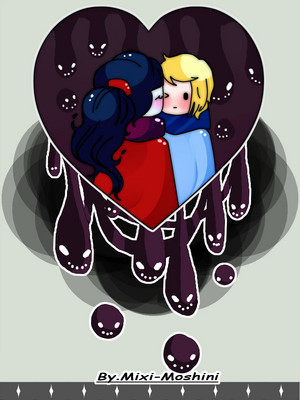 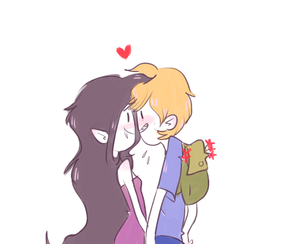 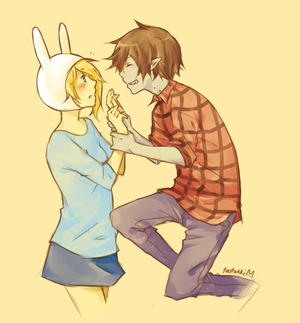 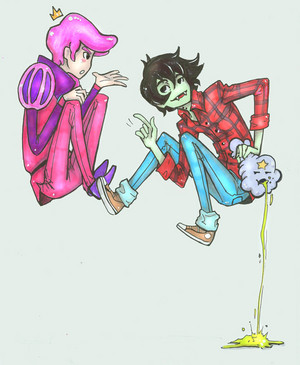 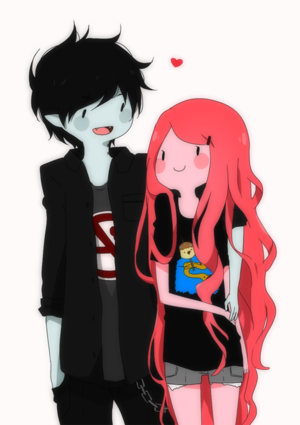 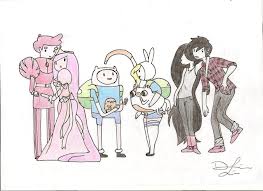 1
My drawing
added by marcelinerocker 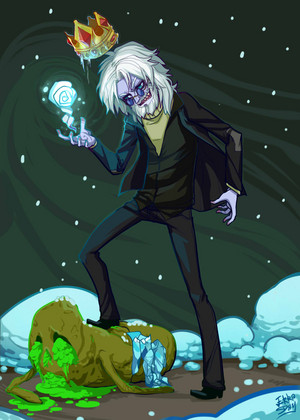 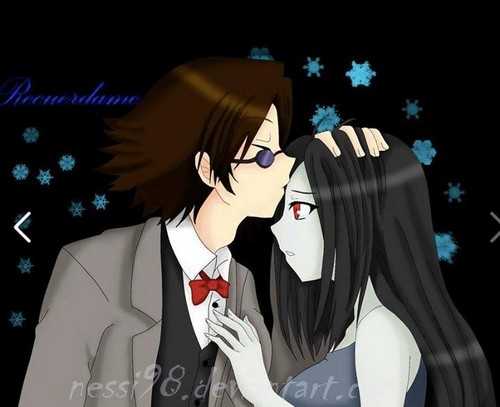 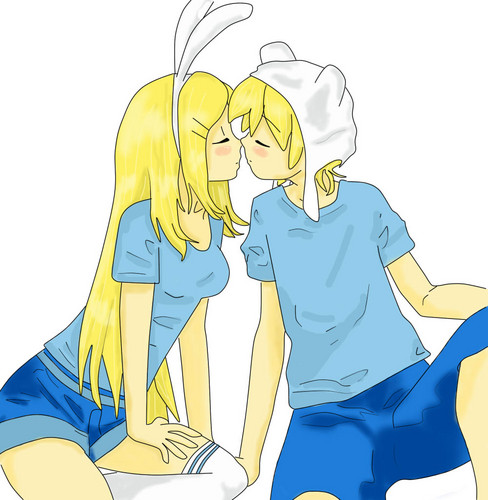